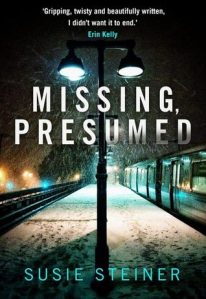 When Will Carter comes home to his flat just outside Cambridge on Sunday evening in December he can’t find his girlfriend, Edith, anywhere. What he does find is a broken wine glass, blood, and signs of a struggle…but no Edith.

Lying in bed, feeling depressed after another bad internet date, DS Manon Bradshaw hears the call over the police radio. Edith’s house is only five minutes away and she can’t sleep anyway so she heads over to what could be the scene of a crime.

The could is the key here because it isn’t clear what has happened to Edith, and won’t be till the end of the book where there is a great twist I didn’t see coming but tied everything together nicely. In the beginning, though, there is little for Manon or the team to go on. No DNA, no CCTV, no body. There’s also Edith’s erratic behaviour in the weeks leading up to her disappearance.

The only thing the police do know is that, whatever has happened, the pressure is on because Edith is the daughter or Lord and Lady Hind. He is physician to the queen. They are both friends of the Home Secretary and able to make a fuss if things aren’t going their way. Plus there’s the press interest.

Lord Hind is distant and controlling. His wife, Miriam, is slowly losing control, turning herself inside out with wondering what has happened to her daughter and what is happening to her marriage as the pressure mounts. You know this because her voice is one of the ones that tells the story, along with Manon, police office Davey, and Edith’s best friend Helena.

I say their voices but maybe that’s not quite accurate as the story is in the third person.  Normally when a story involves multiple viewpoints the third person doesn’t work for me but, I have to say, here I wasn’t bothered by it.  In fact, I think it helped me get under the skin of the characters and understand just who they were.  And it meant that the book became less about the crime, more about the people involved in the aftermath.

I especially grew to like Manon and felt for her in her desperate search to find love and acceptance, even if it means pretending to be someone she’s not. Davey grew on me too with his caring nature and desire to do right by people…plus his ability to put up with Manon!  As I got drawn into their lives I have to say Edith faded at times into the background – I almost forgot I was supposed to be wondering what happened to her at times.  I liked this – and the book – a lot as a result because it made it different from a lot of the usual crime novels I read and well worth a read!

Note: I received this book from the publisher in return for a fair and honest review – all thoughts, feelings and opinions are my own.