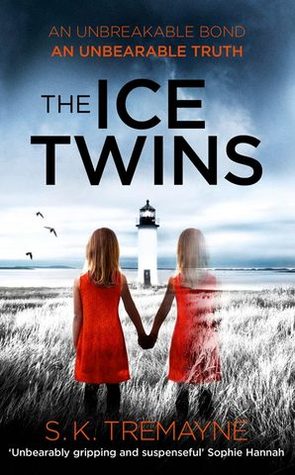 A year after one of their identical twin daughters, Lydia, dies in an accident, Angus and Sarah Moorcraft move to the tiny Scottish island Angus inherited from his grandmother, hoping to put together the pieces of their shattered lives.

But when their surviving daughter, Kirstie, claims they have mistaken her identity—that she, in fact, is Lydia—their world comes crashing down once again.

As winter encroaches, Angus is forced to travel away from the island for work, Sarah is feeling isolated, and Kirstie (or is it Lydia?) is growing more disturbed. When a violent storm leaves Sarah and her daughter stranded, Sarah finds herself tortured by the past—what really happened on that fateful day one of her daughters died?

I had heard a lot about The Ice Twins before I bought it – which was quite a while ago if I’m honest – and I had also read The Fire Child, S. K. Tremayne’s second book, which I’d enjoyed.  This meant I had high expectations for this book even before I’d crack the spine, not always a good thing as it’s much easier to be disappointed.  I have to say, however, that I wasn’t. This is a good book and better than The Fire Child in many ways.

It’s better because the characters feel more solid and real, the husband a little less unrealistic in his behaviour, and because it’s spookier.  I know this isn’t a ghost story but it has elements that definitely lend itself to that, especially whether there are one or two twins living in the remote farmhouse with Sarah and Angus.  They are identical so if there were two, how would you tell?  And what about the toys that keep appearing, the way that children at school respond to Kirstie / Lydia?  It’s a great set up and S. K. Tremayne does a great job of keeping you guessing as, slowly, secrets are revealed.

This is one of those books where nothing is as it seems, no one is telling the truth and no one is quite as perfect as they may initially appear.  At the heart of it all though is a distraught little girl who can’t seem to get anyone to believe her.  But then, to do that, her parents would have to face some hard realities.  I loved all the “is she / isn’t she” Kirstie or Lydia questions and the twists and turns the book took.  I couldn’t decide if I liked Sarah or Angus or if they were right, wrong, good or bad.  Add to that the remote setting, with the harsh conditions and the not so trusting locals and it really did make it a page-turner.

I can see why so many people raved about it when it was released and think I am now one of them.  I would recommend this book, especially as the nights draw in as it’s the perfect time for something a little spooky, and liked it a lot.  Enjoy!