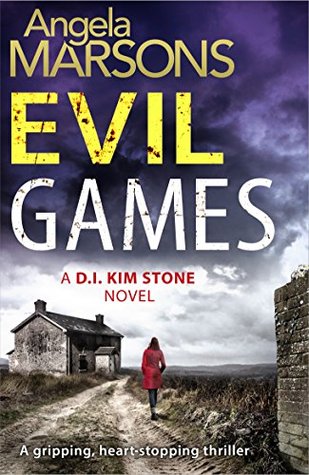 The greater the Evil, the more deadly the game…
When a rapist is found mutilated in a brutal attack, Detective Kim Stone and her team are called in to bring a swift resolution. But, as more vengeful killings come to light, it soon becomes clear that there is someone far more sinister at work.

With the investigation quickly gathering momentum, Kim finds herself exposed to great danger and in the sights of a lethal individual undertaking their own twisted experiment.

Up against a sociopath who seems to know her every weakness, for Detective Stone, each move she makes could be deadly. As the body count starts to mount, Kim will have to dig deeper than ever before to stop the killing. And this time – it’s personal.

Finally – over a year and a half after reading Silent Scream, the first D.I. Kim Stone novel – I have gotten round to doing what I always planned to do, reading Evil Games (the second in the series).  Why has it taken so long? I have no idea, and it wasn’t because I hadn’t enjoyed the first book.  More, it was a case of too many books and too little time.  Still, I made it eventually…and I’m very glad that I did because it was really, really, really good.

The book opens with Kim and her team raiding the house of a suspected child abuser, a nasty subject matter any time you have to read about it and Marsons gets that across from the first page. The people involved are not nice and Kim is determined to bring them down.  At the same time, a young woman, traumatised by a horrific rape sits with her psychiatrist trying to come to terms with what has happened to her and the fact her rapist has recently been released from prison.  Later, she takes a knife and attacks the man who attacked her.

Investigating the attack, Kim contacts the psychiatrist (Alex) to try and understand what would make the young woman do what she did.  Instead of a concerned doctor, she finds someone who seems more interested in how the young woman reacted after the fact; it’s something Kim can’t get her head around and makes her want to know more about Alex and just what she is up to.

All of a sudden, the story, which you thought was going to focus on the child abuse case, changes and becomes something much more complex and complicated – in a good way.  The initial case doesn’t go away but Kim can’t stop her mind going back to Alex, especially as she becomes involved in more cases that seem to involve the doctor as well.  Adding to her suspicions is the fact that, each time they meet, the doctor seems to know more about Kim and her past.

It’s a past Kim would rather not return to – she had a troubled childhood and has grown up to be a troubled woman as a result.  She’s also a good detective, one who will stop at nothing to find the truth and making sure that the guilty pay.   She doesn’t do much to make friends as a result of her past yet there is something likeable about her all the same – possibly because she has the loyalty of the team and possibly because you know she will always try and find the truth.

In Alex, she has found a perfect adversary in many ways, one who pushes her buttons and leads her into danger (which she can see but can’t avoid).  The way they played off each other was very clever and made Alex a very chilling character.  I was worried at first she might become a caricature but thankfully that wasn’t the case and I believed in her throughout the book, making it easy to become absorbed in the plot and keep turning the pages.

Adding to my enjoyment was the setting, the Black Country, where I lived for over ten years.  It was fun to read about my old stomping ground, even if it was the seedier side of it.  For those who don’t know it, Marsons does a great job of describing the places and the people who live there.  In fact, she does a great job all round here.  Evil Games is well written, with a clever story, interesting characters and plenty of tension.  I really can’t find anything that I would have liked done differently or that didn’t sit right with me, leaving me loving this book and determined not to wait so long till I read the next one!