Once again I’m linking up again with Diane at Bibliophile by the Sea who hosts a post every Tuesday for people to share the first chapter / paragraph of the book they are reading, or thinking of reading soon. Diane is currently on a summer break but I have decided to carry on regardless because these are some of my favourite posts. I see others are doing the same – if you are, please leave a link to your post in the comments so that I don’t miss checking out your reads.

I’m also joining in with Teaser Tuesday, hosted by The Purple Booker, where you share two teasers from your current read. I read a lot of these posts over the course of an average Tuesday so thought it would be fun to join in here too.

So, after a very long intro, this is what I’m reading this week… 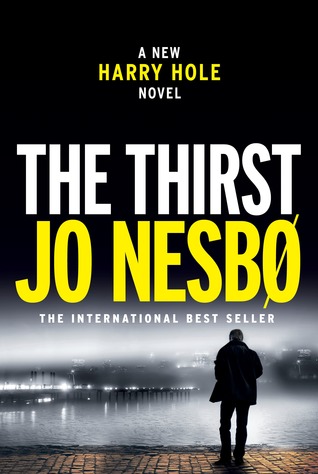 The murder victim, a self-declared Tinder addict. The one solid clue—fragments of rust and paint in her wounds—leaves the investigating team baffled.

Two days later, there’s a second murder: a woman of the same age, a Tinder user, an eerily similar scene.

The chief of police knows there’s only one man for this case. But Harry Hole is no longer with the force. He promised the woman he loves, and he promised himself, that he’d never go back: not after his last case, which put the people closest to him in grave danger.

But there’s something about these murders that catches his attention, something in the details that the investigators have missed. For Harry, it’s like hearing “the voice of a man he was trying not to remember.” Now, despite his promises, despite everything he risks, Harry throws himself back into the hunt for a figure who haunts him, the monster who got away.

This is the 11th in the series, one of the few I’ve read all of and in order.  Here’s how it starts…

He stared into the white nothingness.

The way he had done for almost three years.

No one saw him, and he saw no one. Apart from each time the door opened and enough steam was sucked out for him to be able to glimpse a naked man for  brief moment before the door closed and everything was shrouded in fog.

The baths would be closing soon. He was alone.

And here are a few teasers….

“Truls Bernsten pressed the doorbell with his thumb and heard it ring inside the flat, noted that he ought to stop biting his nails, and let go”

“When, Katrine noted. Not if. It was tiny but important choices of words like that which signalled that the servants of the state were working tirelessly, that the wheels of justice were turning, and that it was only a matter of time before the perpetrator was caught”

So what do you think? Has this whet your appetite – would you keep reading?

10 thoughts on “Tuesday intro: The Thirst by Jo Nesbo”